ovely to return to the scene of our very first concert, which was March 8, 2012!  (To date we have performed 16 concerts.) 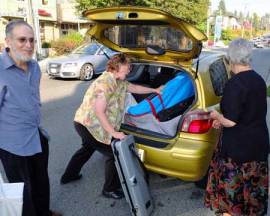 The SSPlayers & the Toyota Echo

Ida Culver House, Ravenna is a very pleasant setting, the audience is so friendly and interested, the warm energy makes for enjoyable playing and spontaneous exchanges between listeners and players.  We were especially excited to be meeting Nancy Hellberg, the previous owner of our harpsichord.  She’d asked David Calhoun to get it back into playing condition so she could sell it; and David knew we were looking for an instrument that would fit into one of our cars.

David had been at our first concert, to transport and tune the harpsichord that he’d lent us and that did NOT fit into our car.  So we were very surprised to see David at our return engagement!

The audience was as attentive as previously, picking up on some of our comments about the music and asking good questions.  I really enjoyed hearing the laughter during the Telemann Gulliver Suite, at the sudden ending of the very short Liliputian Chaconne and, in a later movement, when the introverted Laputians were getting whacked into consciousness by their servant “flappers”.

After the concert Nancy told us she was very happy to hear the improvements David had made in the harpsichord, and also to know that the instrument was not just being played, but being used in the service of a mission such as ours.  ©Olga Hauptman 2012