We put together a Holiday program that includes the Corelli Christmas Concerto, a few charming Nöels set by Charpentier, and ending with some Christmas Carols: O Tannenbaum, Deck the Halls, and Silent Night. We like the whole program—it’s all beautiful, bright, cheerful music. 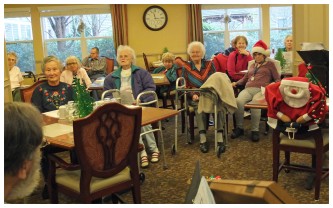 When we get to the Carols at the end of the program, we ask the residents to join in with us. And they do–singing with real gusto! I get teary eyed hearing them sing.

We’ve been very busy this past couple of months: we put out our first Newsletter in November and started a fund raising campaign on Facebook — The  “Salish Sea Players December $1,000 Campaign.” (The last I heard,  we’re about half-way to our goal. Thank you to our new partners and thank you to our Facebook friends for putting up with us. Every little bit helps us to keep performing for this special audience!)  We’re planning our first Fundraising party on Bainbridge Island in January and we’ll be performing at the beginning of the next Recorder Society meeting in January, giving us a chance to let more people know about 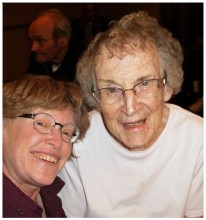 But, you know, the most important part of all of this is meeting the residents of the Homes, sharing the music that we love so much, and having the chance to chat with them after the concert. We were at Merrill Gardens-Northgate the other day, chatting with the residents after the show and I was treated to one of those extra special moments that remind me of WHY we’re doing this:

A woman dressed in Christmas Red came up to me after the show, her eyes brimming with tears. “We don’t normally have such classy acts here,” she said.  I asked her if she had been touched by the music, if it had brought up memories. The tears began to fall and with difficulty she responded, “I had so many memories today – thank you so much for coming.” I gave her a big hug before she left.  We were all moved.

We wish you all a very Happy New Year filled with many special moments.