yers performed a concert of violi 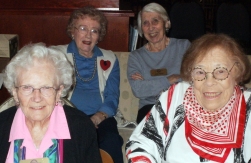 n duets last night as part of the Valentine’s Day celebrations at the University House in Wallingford. We were told that our audience would be smaller than normal because many residents were at the Al Gore event in Seattle (“we’re very politically active here!”) but we had a full house even so. And

what a great audience-they were involved, attentive, and enthusiastic.

Several folks thanked us for coming because they were no longer able to get out to concerts. One gentleman told me that he had been a regular at the Seattle Baroque

Orchestra concerts in years past—“Baroque all the way” he said!

One big hit on the program was the selection of Béla Bartók duos that we played.  One lovely lady originally from NYC even remembered Bartók coming to NY in the early 1940’s.

Ila introduced us in interview fashion. Talking before the show she and I found out that we knew several people in common and that her son-in-law, John DeJarnatt used to play oboe in the Seattle Symphony. He and I even went to the same high-school though not at the same time (Lincoln Linx!!!)

I spoke with two lovely married couples who attended the concert last night. The first couple has been married 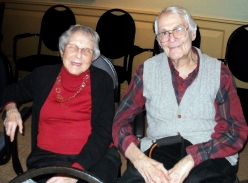 d having only recently moved to Seattle from Japan. The other couple has been married for 70 years! “Never had a real fight in all these years” said he. Wow!

I feel so lucky to get to meet such wonderful people. A lovely Valentine’s Day!