May 5th is GiveBIG day!

Tomorrow is GiveBIG day in Seattle sponsored by t

he Seattle Foundation. This is the first year that Salish Sea Players will participate! Please read our newsletter to learn more! http://p0.vresp.com/gqpKve 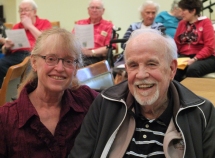 Thank you for your support!

Music of the Heart

January 29, 2015: We played two concerts today at the Foss Home. One concert was for the cottages, an assisted living area that feels like a little village. The courtyard is where they hold their annual Farmers Market. After that show we moved to a memory care unit. I found this day of concerts to be moving and again, a confirmation of how important it is to continue presenting these concerts.

The concert in the cottage was a very cheerful crowd. Questions kept flying at us (which we love) during the whole show. A lot of laughter and exuberant applause. At the end of the concert we received one of the nicest comments: “Coming to this concert was like being

invited to the most wonderful party.” It did feel like a party!

We moved to the memory care unit for our next concert. We perform for this unit a lot and we get to recognizing many of the residents. One in particular has caught my eye on the last several visits. This resident is basically non-verbal—I’ve approached her every time we visit and she looks at me like she’s not sure who or what I am. But I have been convinced that she was participating in her own way. This concert she wheeled herself very close to us and I observed her squeezing her eyes closed with a great intensity. After the concert I asked her if she liked the music and at first it was that ‘who are you’ lo

ok –but then she nodded YES! The Activities Director and I were surprised, happily. I asked her another question about the music and she suddenly flashed us a brilliant smile—it made my knees weak.

I learned that day that the Foss memory care unit is going to participate in the individual ipod project and that several of the residents, including the resident that flashed us the smile, are in line to receive one of the ipods! You may have heard of this sort of thing from the movie “Alive Inside.” The Foss Home calls their project “Music of the Heart” and they are looking for donations of ipods, cds, and itunes gift cards. If you’d like to help out here’s  more information:

The final few days of 2014 and the final few days of our year-end fundraiser. We’ve been awed by the generosity of our supporters–people like you. In our current newsletter Linda reminisces about how she got started on the violin and remembers a visit to Ida Culver House-Ravenna. Here’s the link: http://p0.vresp.com/ccLBOk

We’ve enjoyed remembering “the way we were” and we hope you’ve enjoyed it too. Music often inspires memories long forgotten, memories both sweet and bitter-sweet. And when we play for the residents of long-term care communities we often hear about those memories. Please join us–help us to inspire memories by donating to the Salish Sea Players. It’s tax deductible and easy to do online through our fiscal partner Shunpike.

BTW, if you prefer to send a check that’s fine too. Just make sure the check is made out to:  Salish Sea Players c/o Shunpike

Another way you can help is to let a friend know about us. Pass it on! And Happy 2015!!

Week three of our Year-end fund drive begins with a story from Laura about how she chose to play cello. To read the whole newsletter just click on this link:  http://p0.vresp.com/u081Fh

And if you would like to join us in bringing Baroque chamber music to the long-term care communities of the greater Seattle area you can make a tax-deductible donation easily and safely online through our fiscal partner Shunpike.

BTW, if you prefer to send a check that’s fine too. Just make sure the check is made out to:  Salish Sea Players c/o Shunpike

Another way you can help is to let a friend know about us. Pass it on!

We begin the 2nd week of our Year-end fund drive with a fun story from Olga about how she got started on the violin and her first concert. To read more just click the link: http://p0.vresp.com/0m61ED

And if you would like to join us in bringing Baroque chamber music to the long-term care communities of the greater Seattle area you can make a tax deductible donation easily and safely online through our fiscal partner Shunpike.

BTW, if you prefer to send a check that’s fine too. Just make sure the check is made out to:

Today we begin our Year-end fund drive. We’ve had a busy year and are looking forward to the coming year. Please click the link to read our newsletter! http://p0.vresp.com/HDlUJr

Please consider joining us and becoming a partner in presenting the beautiful music of the Baroque to the residents of the retirement, nursing, memory, and long-term care facilities of the Seattle area. A tax deductible donation of any size helps us to keep hands singing. Easy and safe to do on online through Shunpike, our fiscal partner. 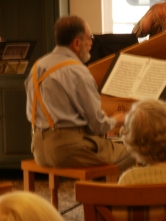 Fred at one of SSPlayers first concerts (La Conner, 2012)

My dear friend, colleague, and harpsichordist for Salish Sea Players has decided to retire. We’ve written a nice newsletter with lots of pictures and remininces from Fred tha

t made me cry. I am sad but so happy for him AND he will perform with us once in a while! Please follow the link to read the newsletter:

Join Salish Sea Players in bringing beautiful Baroque music to the residents of retirement and long-term care facilities. Your tax deductible donation (small or large) is much appreciated. Safely donate on-line with our fiscal partner Shunpike.